Hello, I am Jennyfer. I am a spanish TS female and currently dedicated to London who loves to be desired and fuck very naughty. I like doing many things with my 20cm tail that is a

It was already dark by the time we found our lodgings for our stay in Brussels. As it was a girly weekend, we were eager to see the nightlife, but having chosen the cheapest hostel in the grimmest suburb, we weren't ideally situated.

Undeterred, my friend Carrie and I decided to don our sparkliest togs and explore, while the others sensibly contented themselves with bottles of beer at the hostel. Our search was fruitless: after a full hour of wandering past shuttered shop fronts and deserted car parks, we were no closer to the cafe-lined side streets and bustling nightclubs we had hoped for. 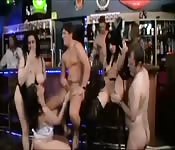 With a smudgy map and no taxi in sight, we were beginning to lose hope when Carrie spotted a sign with the words we'd been looking for: Club. At this point the barber-shop-style lights and its remote location didn't bother us. We just wanted a place to rest with a glass of something cold, to let our stilettoed feet cool down.

However, our desperation couldn't silence the alarm bells that went off in my head when Carrie observed the lack of an obvious entrance to the club and said: 'I guess we have to ring the bell. We were buzzed in and exchanged worried glances as we climbed the stairs. I instantly regretted crossing the threshold but whispered to Carrie: 'Safety in numbers. Carrie asked boldly in English, 'Is this the club? Like in an amateur French lesson we analysed what we had heard.

Something about an exchange? Then it dawned on us. We were in a swingers club. By now a couple more middle-aged revellers in their underwear had come to stare at the lost tourists. My face was melting with embarrassment but Carrie insisted on asking them for directions back to our hostel; we were, after all, hopelessly lost.